ExaGrid offers a series of 10 backup storage appliances that can be mixed and matched in a scale-out GRID.

Any size or age appliance can co-exist in the same GRID and can scale from a single 1TB full backup up to a 448TB full backup in a single GRID. The system is flexible as the proper size appliances can be added as data grows. This eliminates the need for up-front planning and allows customers to expand the ExaGrid as their data grows.

The unique landing zone allows for the fastest backups and the fastest restores, recoveries, and tape copies.

The unique scale-out approach, which includes full appliances in a GRID, is the only solution that fixes the backup window length resulting in the elimination of expensive forklift upgrades.

The ExaGrid product allows for replication to a second site for disaster recovery as well as the ability to allow multiple data centers to cross-protect between each other.

The ExaGrid approach allows you to simply pay as you grow by adding the appropriate sized appliances as your data grows. Any size appliance or any age appliance can be mixed and matched in a single GRID, which allows for IT departments to buy compute and capacity as they need it. This approach also eliminates product obsolescence.

All appliances and all GRIDs are managed by a single user interface.

The typical business or organization is seeing data growth of 30% a year which doubles data every 2.5 years. This data growth presents challenges to IT to ensure their backup system can scale easily to support that growth. With disk backup solutions that have a front-end server architecture and add just disk shelves as data grows, you start with a short backup window, but as data grows, the backup window expands because only disk is added but no additional deduplication processing resources. Eventually, the backup window expands to a point where you must replace the front-end server with a more powerful server via a costly "forklift upgrade."

In contrast, ExaGrid's scalable GRID-based approach adds full servers—including memory, processor, and bandwidth as well as disk. The figure below shows the differences between how the two different architectures cope with data growth over time. 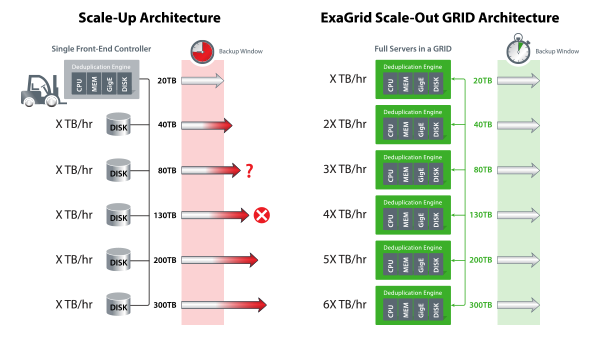 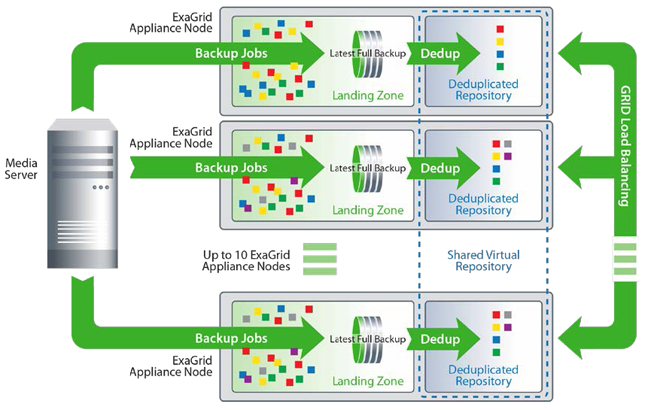 ExaGrid disk backup appliances include GRID computing software which allows them to virtualize and share data storage capacity with one another. This GRID system shown above can expand as your data grows by adding appliances to the GRID, providing up to 2.4PB raw capacity, 1.95PB usable capacity, and allowing full backups of up to 1PB in a single GRID. Multiple GRIDs can be used at a single location.